This Music in This Movie is Really Good! The Beetlejuice OST 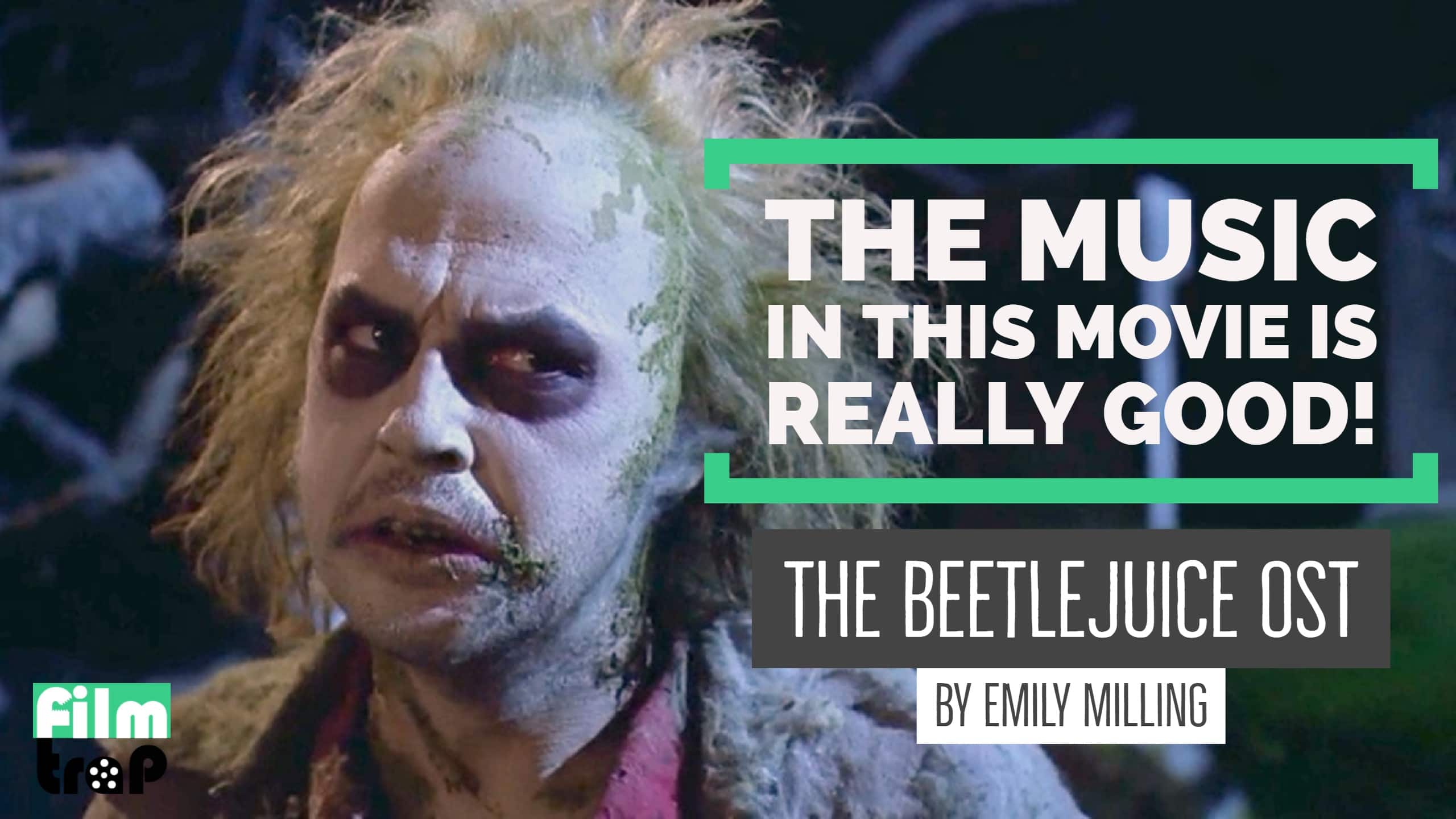 There’s a chill in the air and it’s not just because we’re experiencing -40C temperatures here in Toronto. NO. There are spooky sounds afoot! It’s really creepy stuff! Also there are ghosts! And a guy who you can hire to possess the living people hanging out in your house. Man he’s creepy.

I digress – Let’s get to the topic at hand: The Beetlejuice OST.

This is a classic film and some might argue (me, anyway) that it’s the best movie of all time. Ok it might be somewhat shy of Oscar-worthy potential, but what it DOES have is a fantastic score by Danny Elfman.

Prolific, weird, hailing from the vaudevillian 80s group Oingo Boingo, Danny Elfman’s early film work (including Beetlejuice and Edward Scissorhands) has a distinctive fingerprint. A fingerprint that has been ruthlessly poached by evil temp tracks and corporate goons. The internet also hates Danny Elfman for writing scores with the same sound over and over again, but I’ll argue that he’s evolved over time (Beetlejuice OST vs. Novocaine OST). Plus, most recording artists have a distinctive sound.

For example, we know Kate Bush music when we hear it because of her dense and challenging style, but most likely don’t think twice if her music sounds sort of the same. Because she’s one person. And most artists have a distinctive style. Like how most people also have distinctive smelling farts. It’s science. You can also use this analogy on any shitty pop band out there. But only the shitty pop bands, not the good ones (yes, there are good pop bands).

The Beetlejuice OST opens the film right away with an eerie mashup of a major key theme played on what sounds like a xylophone and then BLAM! Day-o (The Banana Boat Song) in a minor key, followed by Elfman’s signature ghostly choir grunting and dramatically dying in the background. Without even getting a minute into the film, Elfman completely packs your ears with an incredibly balanced frequency palette, using heavy brass, piano and light and airy woodwinds. I especially love how this piece creates a spooky freefall effect (which I’ll talk about a little later) and on its own, creates imaginary visuals that look a lot like the lost souls room.

As the camera cranes over the miniature town that Adam Maitland (Alec Baldwin) has built in the attic of the home he shares with Barbara Maitland (Geena Davis) we instantly get a feel for the tone of the film. There’s something sinister happening in the bassline and the viewer should be careful to watch out for creepy things, but there’s something comedic and impetuous about the way that Elfman staggers piano and brass notes to create the bassline. So should we trust it a bit more?

About two thirds of the way through this piece, four-count percussion that feels like a giant ball rolling down the side of a hill suggests immediate destruction, yet also grounds the viewer in a false sense of security (also more on that later). Pair that with the choir, frantic piccolo and a crash symbol and you’re 100% on the edge of your seat!

WHERE DID YOUR SEAT EVEN GO?

Have I said enough about the opening theme yet? Probably. I just love it so much and there are WAY too many elements to it to ignore! It also informs the rest of the score so let’s just sit with this magical number a minute, shall we? Here ya go:

Adam and Barbara go about their lives and die. Some dumb dog we never see again decides he doesn’t want to stand on the wooden plank that COULD SAVE THEIR LIVES. Jerk dog. Naturally the score follows the joyful pair as they begin their vacation and it almost feels 50s era happy-go-lucky. Lots of harp, lots of pizzicato strings and bright and cheery viola/violin lines in a major key.

Alas it gets dark immediately after. Because they die. The choir returns to usher Adam and Barbara into the Neitherworld (Beetlejuice cartoon reference!!!). I kind of love this scene because the score is so much a part of what the characters are experiencing. It adds a hint of comedy to a super sad realization about being dead.

You may recall Adam’s silly mis-reading of the book title “Handbook for the Recently Diseased” er… “Deceased”. Between his error and Barbara’s correction the music articulates the shock of being first “diseased” and then again of being “deceased”. It’s a great moment. If you don’t remember it, listen for it next time you watch this film.

As we meet Beetlejuice (Michael Keaton) for the first time we get a bit of Oingo Boingo flavour with an ominous tango, accompanied by Elfman’s signature clarinet trills just to break it up a bit. I love the way he’s able to move so deftly between two completely different elements to keep a rhythmic and melodic theme going, and support the action on screen. It’s right around here that the score to starts to blend into the film and become more supportive of the actions rather than articulating them, or being a dominating presence.

This is what most scores do so you know Danny Elfman is on the right sound… track. Hehehe.

Throughout the rest of the film the music stays relatively consistent using clearly defined trills with instruments in higher registers and strings that pull the viewer back and forth with jarring, out of place phrases for cinematic effect. Hey, that’s what this music is here for, right? Of course the bassline continues to keep these wild offshoots grounded, typically finding root in 4/4 time and quarter notes.

As it happens, people like to have a beat to hold onto when music gets all experimental and crazy, so they feel a sense of safety and familiarity. If there was no familiar beat it would a: provide a completely different tone for the film (way more sinister, less comedic) and b: become grating and annoying. Not exactly blockbuster worthy.

The great thing about pairing a steady and reliable bassline with erratic trills and phrases is that it’s actually luring the audience into a false sense of security. Horror films do this A LOT. Being able to count in time to a piece of music makes us feel safe. It’s familiar. If suddenly, a sharp exclamation is injected via piccolo trill and the bassline is completely removed (this usually happens during jumpscares) the viewer will suddenly feel as though she is in a freefall, unsure where to focus her survival energy.

By contrasting lower and higher frequencies, horror scores actually use human instincts to create fear, just through sound. More on that in this video:

Elfman does this a LOT in the Beetlejuice OST. And I love him for it. SO FUN.

I would be remiss and would probably catch a lot of flack for not discussing the use of Harry Belafonte’s Calypso album which I used to listen to endlessly in high school. I was very popular. Aside from the fact that it’s such an odd album for milquetoast Barbara and Adam to be listening to (are they trying to be edgy or something?) it also serves as the Maitland’s scare music. Yeah, they think that it’s scary. Remember the super fun possession dance scene around the dinner table? Hide the deadly black tarantula!

The Calypso album is the only diegetic music throughout the film and one must ask if it’s only because the rights to that particular album were cheap that year? Whatever the case may be, it adds a delightful and happy feeling to the entire film. I like it.

Overall this score is one of my favourites and this article is an incredibly biased look at the piece. I hope it provided some insights though, and next time you watch Beetlejuice, listen closely for the whack-a-doodle piccolo trills! They’re nuts! Also the clarinet! Also the piano! Also all of it!

What did you think of the score? Comment below so we can chat about it!