With Roger Moore passing not so long ago, I really wanted to review at least one of his films that weren’t part of his James Bond days. For me, I feel that the best way to celebrate an actor who brought so much joy into my world is to watch some of his worst films. In a sad and also happy turn of events, I found out that I do not have a copy of Boat Trip, so I happily settled for The Quest.

The Quest is an action period piece that for the most part is light on the action. Still, not only do we get a fantastic swindler character Lord Dobbs, played by the ever suave Roger Moore, but we also get a Jean Claude Van-Damme’s directorial debut.

That’s right! The muscles from Brussels actually directed this, and also got a partial writing credit. So you know this is going to be quality.

But as much as I want to talk about Mr. Moore, the lengthy tale of JCVD’s main character has to be brought up first. Jean Claude plays the very American Dubois, a man-child who runs a gang of child thieves in Chicago in the early 1900’s. He dresses as a mime, puts on stilts, and distracts people as his devious children steal from those unlucky few who can’t run away fast enough from the crazy heavily accented 12-foot tall juggling mime demon wandering through their streets.

It’s at this point one has to wonder what the qualifications were to get into that street gang. JCVD is the only adult, but I feel like it is a stretch to say he is the mastermind of the operation. Maybe they use a very controversial management system based on height, or even more likely the children gave JCVD some of their snacks and then they couldn’t get him to leave. 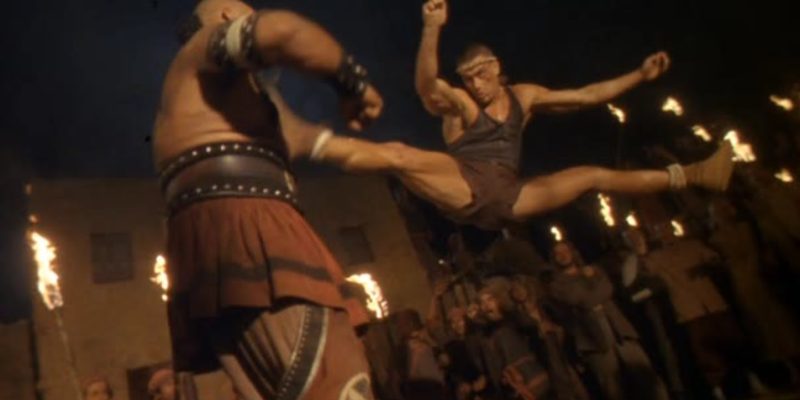 Anyways, Dubois has a pretty lengthy story arc stuffed into 90 minutes. He begins as our favorite stilted mime, and in a few short weeks works his way up to become the unstoppable fighting champion of the world. No training montage necessary. Apparently, he had the power in him the whole time. It is only after he becomes this fighting master that the actual plot you as the viewer wanted out of a Van-Damme movie starts. The fighting tournament. But that is getting ahead of myself.

First Van-Damme runs away from his gang of children, only to be caught stowing away on a boat. During this time he becomes a boat slave, dare I say, not unlike Judah Ben-Hur… food for thought. His new found boat slave job ends abruptly when it is quickly pirated by Roger Moore. Moores character Lord Dobbs being a smart man makes it to shore and instantly sells JCVD into a Muay Thai slave boxing ring.

And then a tough, but spiritual training session commences where he is taught the inner workings of this fighting style by being surrounded by muscled men who pummel him senseless until he gets good. Which as we all know is the most effective way to teach martial arts.

We find ourselves in the last quarter of The Quest, watching a racial stereotype version of Bloodsport. 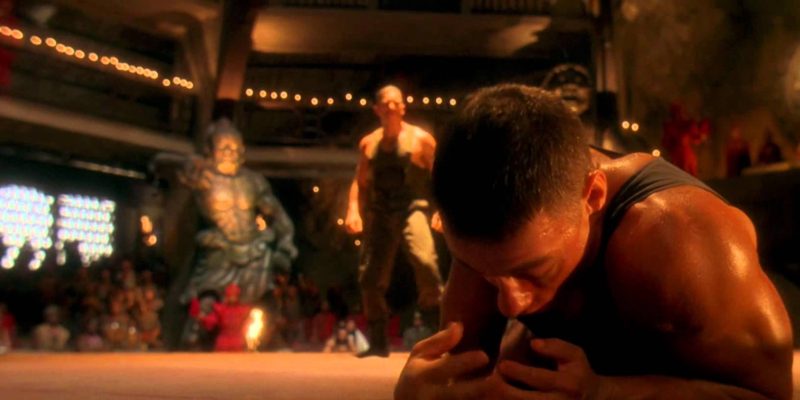 This ancient, super secret, “No Girls Allowed” fighting tournament is meant to show which fighter is the best in the world. They have representatives from every country JCVD could remember while writing the film. I must say that while I am enthused by the Scottish kilt wearing stereotype fighter, I was saddened by the lack of the angry moose riding maple syrup throwing French Canadian Lumberjack representative. Canada has stereotypes too Jean-Claude!

There is also a great moment when one of the fighters, I think the one from Eastern Greenland is killed by the evilest of fighters. This villain is mad at Jean-Claude over reasons which forever remain unknown to the audience. When forced to watch this slow motion death scene Van-Damme flies into a rage or becomes really sad. It was hard to tell, to be honest. Rage tears maybe? This became a bit confusing because we hadn’t really been introduced to this fighter, nor did he have any real connection with heroes and the plot. He was just another fighter in the tournament, where fighters can die.

JCVD’s reaction could be compared to the Enterprise destroying a planet because the aliens on it accidentally killed a red shirt.

So, at this point, you may be wondering if I am going to be talking about Roger Moore since he was the original reason I sat down to watch and review this film. I really wanted to but the problem is that even in this low-end film he was pretty great in his role. Moore was a man with a charming smile and great comedic timing. He shines with charm and class in everything he did. So, while this movie may go off the rails and fall into a pit of stereotypes, and slow motion punches, that didn’t stop Moore from being good in it. Which I think that is the best testament to an actor. 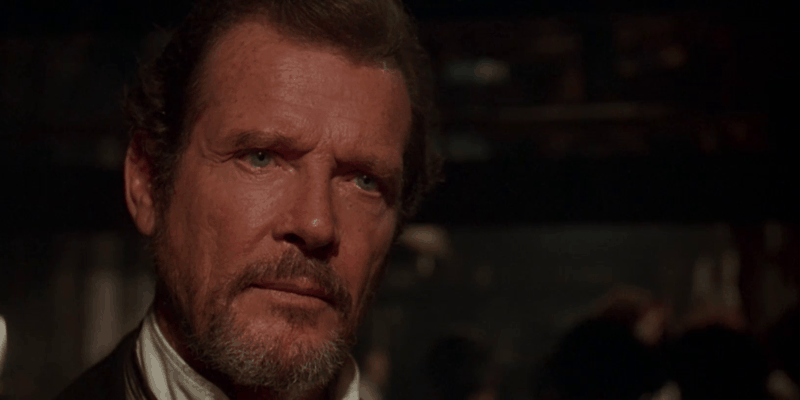 I might think that The Quest is a crap movie, but Roger Moore was not crap in it. So, with great respect to the late Roger Moore, I say give your friends a solid James Bond style karate chop to the shoulder in his memory. But take the time watch his James Bonds films instead of The Quest.