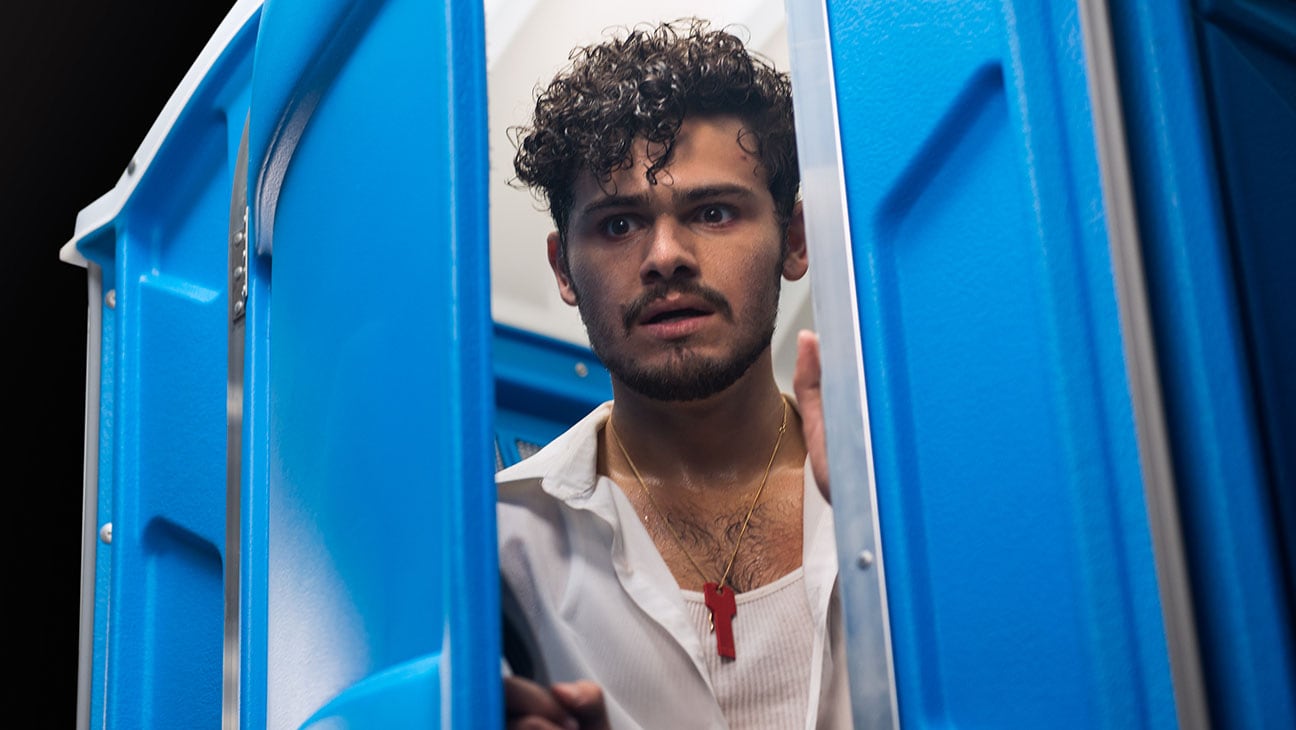 I am going to preface this review by saying that XOXO is a movie which was not made with me in mind. I do not take part in raves, festivals, drugs, dancing, buses, standing in lines, nor generally going outside if not necessary. So, my review may reflect that in its lack of caring about any or all happenings in this film. Although, I should mention that XOXO may also been written by a person who consumes their daily dose of drugs based on the Alphabet, and had just gotten to E for the day. Thank you for your pre-review time.

If you wake up and find yourself needing those aforementioned things to make your day better, this movie may be for you. If not, and you enjoy the simple things in life like story, character development, and dialogue not written by high children, than not so much. XOXO is a movie about a group of teenagers, and some hip older folk who are going to the XOXO super festival rave extravaganza in the desert. Which desert you ask? I have no idea. The movie doesn’t inform the viewer of useless details like location. It feels like the world has lots of deserts, and you should just choose the one you like best. Just remember it has to be near a few small towns and have a working sewer system, as all good deserts are. 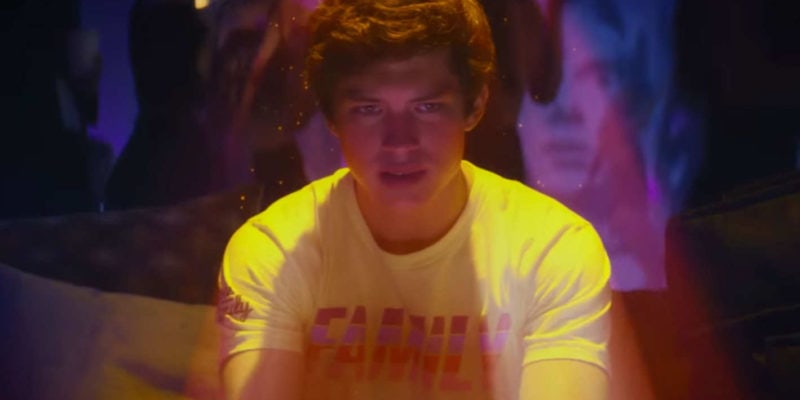 All the characters in the film are all interconnected, and somehow end up affecting each other in even the smallest way, or in some cases made up and unbelievable ways. There is the Youtube star DJ who is looking for his big break, a girl who is meeting up with her online soul mate, and even an older grumpy record store owner who is “Over the scene” of raves and apparently music, but still for some reason rents out a party bus that takes all the rave goers and bros to the festival.

That’s it. That’s the plot of XOXO.

At this moment you might be saying to yourself “But Bob, that’s not a plot. There is no story in that.” Guess what, you’re right. This movie just has stuff, no real story. Sure there are side stories about life, love, dancing, fuzzy vests, bro culture, and the dangers of kissing girls at rave festivals, but no real story to tell, well at least not an interesting one.

My recommendation. Just think of it as a music documentary without any good music, like “Katy Perry: Part of Me.”

Even among all the fast paced music, dancing and love XOXO did have some times to reflect on the nature of life according to rave kids. Quiet moments in which we get thought provoking soliloquies that include far out mind nuggets like “I want someone I can swirl with.”, “I made this festival because I just want to dance!”, and the wonderful life explaining “Kill Yourself”.

Say whatever you want, but when you hear the main female characters speech on life and love (a character whose name which I have forgotten, but I am sure it was Candy, or Trixie, or Princess Sparkle Thong the Unstoppable Dance Machine) you too will wonder why you haven’t dropped everything in your life, put on some sexy black light glowing make-up, a sexy, but efficiently tiny dress and hit the road on the drug fueled rave bus. 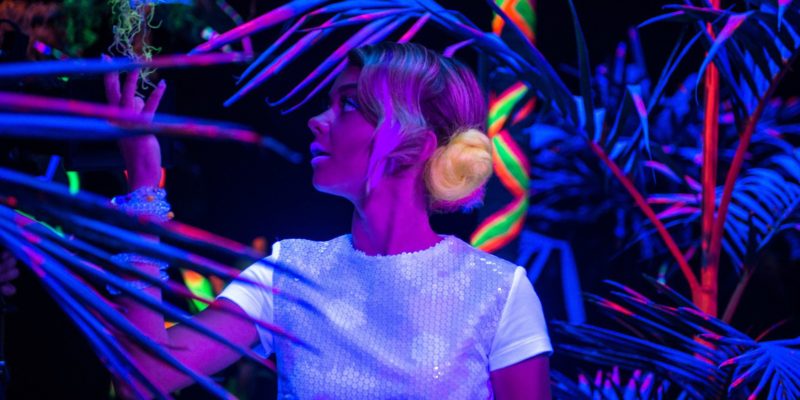 Yet, even after all this black light, drug fueled, uselessness the worst part of this film was the circular nature of the characters. Princess Sexy Sparkles, who doesn’t drink, smoke, nor do drugs goes to a festival made up solely of doing those things she hates to meet her online soul mate.

As she struggles to find him, she begins to learn that maybe meeting a guy at a festival filled with stuff you hate is not a good way to meet your forever love. She then takes this new found life knowledge and hooks up with the DJ character, with whom she just met for the first time, at the rave festival she doesn’t like.

Although they did share a moment when they bumped into each other, and she totally dropped her phone, while he totally dropped his DJ gear. She was in her cute outfit, and he was the shy nerdy type. *Squeal* I can feel my heart flutter over the cutest of couples ever!!!!!!! Like they are totally perfect for each other!

Ugh…I think I am starting to understand the rampant drug use in this film.

Moving on to our heroic DJ. He suffers from a sort of on stage anxiety apparently new to this generation…we call it stage fright. They call it “Its not you, it’s everyone else. You’re a special snowflake.” Because of this, he cannot do anything in front of a crowd when not being supported by his best friend/manager. When he performs at the XOXO festival and his friend fails to show up and coddle him, he proceeds to muck up at a biblical level on stage.

Mortified afterwards, he sadly sits dejected in the back room until a few people show him he has the heart of a tiger and can persevere through something a small as this one failure. He takes this new found confidence with him, finds his best friend and proceeds to steal the main stage for his own epic show. Sadly, he is too scared of this new thing called confidence and needs his security blanket of a best friend to support him again.

Sooooo, he has the confidence to screw over a headlining super famous DJ, but not to actually perform his act…until best buddy man says so. Which makes him end up in the exact same damn place where he started in this film. But now he is happy about his stupid life…it is like these people don’t see that they haven’t gone anywhere.

Princess Rainbow Panties still thinks meeting a stranger at a massive drug and sex fueled festival will net her a soul mate, and DJ Dance Epidemic still needs to be boosted by his friend to perform, even though he has gotten over the fright… So, why bother even watching the damn film if it ends with no one learning anything!!!!!! What is the point!!!!! 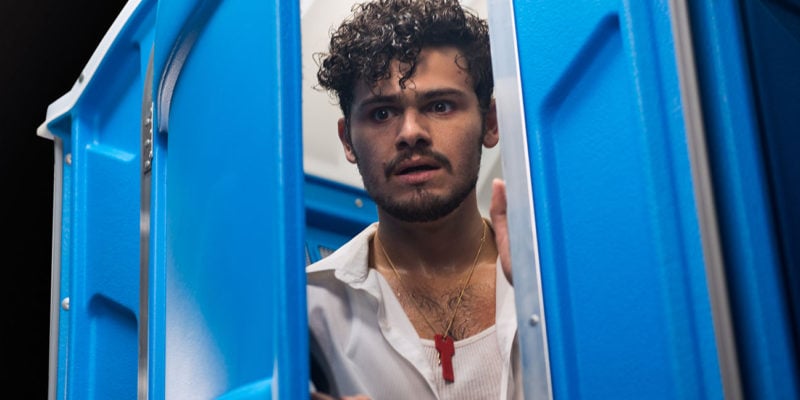 I feel like XOXO would have worked better as satire. While watching this if I found myself looking at the inner workings of a culture that is happy with just being happy, and yet cannot see that what they have is fleeting. So they end up where they started with nothing changing or growing.

I could have found a sad solace in this film. Seeing a multiple generations of people who just want to dance, make out, strip, make love, and never ever grow up, is in a way thought provoking and sad on its own. But if you add to that the meaningless stories of the characters in this film, showing the complete emptiness of these people on a personal level, then you take that underlying sadness away and just make the whole thing a bright blinking light of pulsating dance music.

A solitary beat that repeats over and over without any real purpose for existing other than to satisfy itself. You make a movie that has no purpose…So obviously they nailed the rave culture down. As you can tell XOXO is not my cup of tea, but it is a big steaming cup of something else.